Monastic Life: A Life Without Choices? 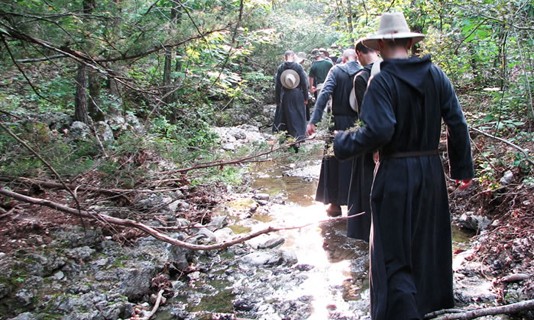 Thou waitest for the spark from heaven! And we,
Light half-believers of our casual creeds,
Who never deeply felt, nor clearly willed

Whose insight never has borne fruit in deeds,
Whose vague resolves never have been fulfill’d;
For whom each year we see

Ah! Do not we, wanderer! await it too?
—“The Scholar-Gipsy,” Matthew Arnold

Recently my wife and I have been looking to buy a house— our first. Constrained as we are by a limited budget, and young and full of dreams as we are, none of the houses that we have yet seen have measured up to our visions, with the result that we have spent a considerable amount of time with our realtor (bless her heart) in search of “the one.” As will happen, professional barriers have begun to be replaced with a more casual acquaintance, until recently we found ourselves standing on the driveway of a house we had viewed (not “the one”, alas!) discussing, as will also happen, religion.

At some point I had mentioned that I was going to spend a few days over Easter at a traditional monastery, and this seemed to pique Cindy’s curiosity. Cindy is a fallen-away Catholic, jaded by the chaos of the sixties and seventies, and the scandals that were brewed in their midst, and expressed her skepticism about the monastic project. “You will probably disagree with me,” she said, “but it seems to me that the life of a monk is a life without choices.” But I did not disagree, pointing out that the lack of choices is precisely the point – that a monk gives up his right to choose in order that he may be able to focus, without distraction, on the one thing that matters.

But of course, Cindy’s complaint wasn’t really that monks are not able (or, perhaps, are unwilling) to choose. This was simply her way of saying that in her view the life of a monk is a dull one, without responsibility, comfort, freedom or happiness. I realized this at the time, and I tried to head off these objections by explaining that many of the priests, monks, and nuns that I know are some of the happiest people I know – far happier, I said, than myself or her. “Are they?” Cindy answered. “I am glad to hear that.”

But I don’t think she believed me. And I don’t blame her. Of what, after all, does the life of a monk consist?

I am a PhD student in philosophy.
View all posts by John Jalsevac →
This entry was posted in Uncategorized. Bookmark the permalink.